Church of San Pietro in Aprica 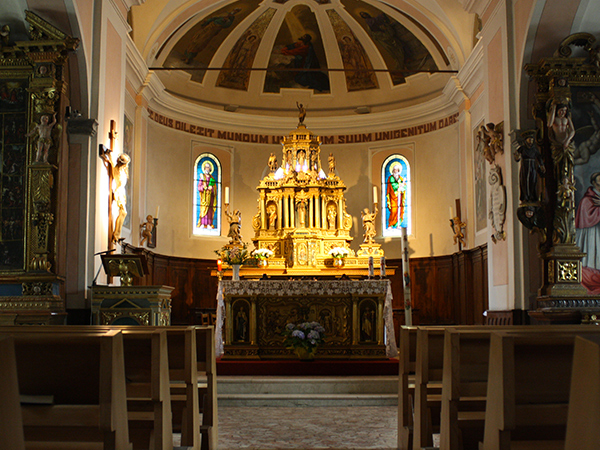 DIRECTIONS: located in the village of Aprica, it can be reached by car

DESCRIPTION:
The ancient Church of San Pietro provides the most tangible evidence of Aprica’s remote origins. Dating from the thirteenth century, the church was built over a chapel that existed before the year 1000. It was built on the Aprica Pass, where there was a xenodochium or hospice to help people travelling along the corridor that connects the Adda river basin to the Oglio river basin, which is part of a north-south route that runs from the Rhine Valley to Valcamonica and finally the Po plain and the Mediterranean. On the same route, there are also hospices connected to the Church of Santa Perpetua above Madonna in Tirano and the Church of San Remigio or Romedio in nearby Valposchiavo (Switzerland). Notwithstanding renovations and enlargements over the centuries, the current architectural structure of the church is based on the basilica model, with a nave and two side aisles separated by columns, which distinguished important churches during the early medieval period. Although the façade is now preceded by a vast portico, its primitive gabled structure is still apparent. Pilasters divide the façade into three vertical sections, each with a portal surmounted by seventeenth-century frescoes. The interior has two seventeenth-century altars at the head of the side aisles, with paintings on canvas set into exquisite wooden altarpieces. The Oratory of the Confraternity of the Holy Sacrament (1747) stands to the left of the façade. The Sanctuary of Maria Ausiliatrice, built on the designs of engineer Damiano Cattaneo and architect Piero Boccone and consecrated in 1999, now stands next to the ancient Church of San Peltro.