From picturesque villages to the pristine nature of the Parks and Nature Reserves, from gentle tracks that follow water sources up the slopes to steep hikes or easy strolls suitable for the whole family, Valtellina offers endless options for hikers.

Valtellina abounds with high altitude tracks connecting some of the most spectacular peaks in the Alps, which can be hiked in stages with comfortable Alpine refuges. Il Sentiero Roma, in Val Masino, winds from 2,100  m alt.above sea level at Rifugio Omio to 2,950  m alt. on the Cameraccio Pass, and takes on average three days. The 110-km Alta Via della Valmalenco track spans the entire Valmalenco range, from Disgrazia to Bernina and Pizzo Scalino, and can be broken into eight stages. The 130-km Gran Via delle Orobie track connects Delebio and Aprica at an average altitude of 1,800 m and is the premier hiking route in the Parco delle Orobie Valtellinesi.

Valtellina is also part of the international Via Alpina network of five hikes that span the eight countries in the Alps, covering over 5,000 km in 342 daily stages. The Sentiero Italia, one of the longest hikes in the world at 6,000 km, crosses the Alps and the Apennines, also passing through Valtellina.

Via dei Terrazzamenti is a predominantly pedestrian route on the sunny side of the valley between 300 and 700 m above sea level. The route runs from Morbegno to Tirano and tells the history and scale of the endeavours of the locals, who cultivated the steep slopes of these rugged mountains.

If you are more interested in routes of historic importance rather than those with religious significance, the Via Spluga and Via Bregaglia in Val Chiavenna are a must. A number of routes are of interest for their role in World War I, including the high altitude Passo dello Stelvio and Passo dell’Alblès in Valfurva.

Routes of religious significance include Sentiero Rusca, which connects Sondrio with the Passo del Muretto; Cammino Mariano delle Alpi, a 160-km, 8-stage route, that finishes at the Sanctuary of the Madonna in Tirano; Sentiero della Rosa Rampicante; and a route that follows in the footsteps of Saint Luigi Guanella

DISCOVER THE MOUNTAIN HUTS OF VALTELLINA 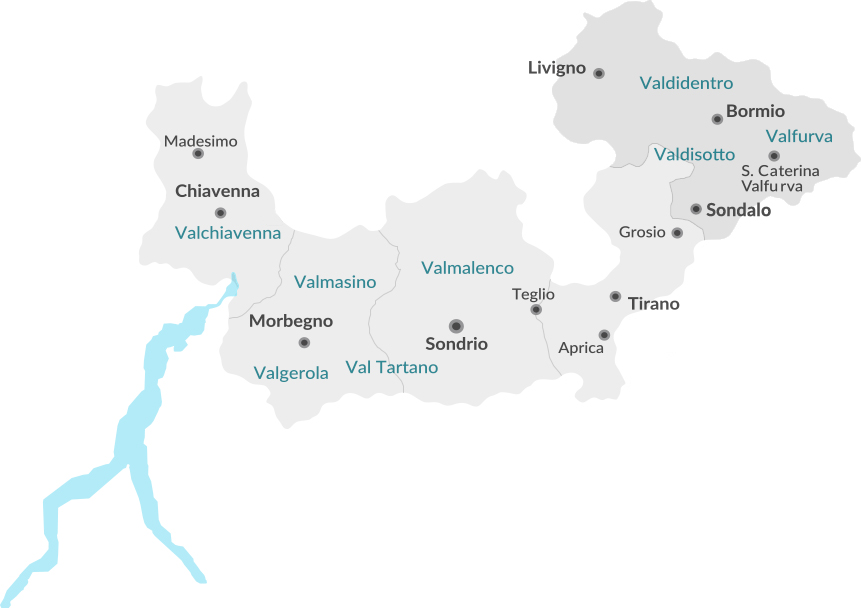