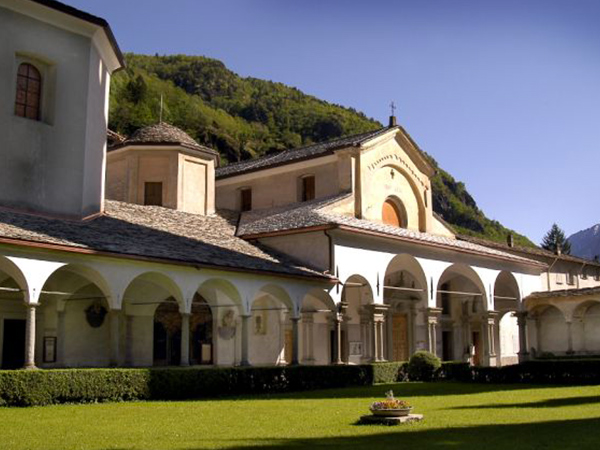 DIRECTIONS: the collegiate church is located in the historic centre of Chiavenna, near the railway and bus stations

DESCRIPTION: the first documents that mention the church date back to 973, but it is likely that it already existed by the fifth century. The building still has ancient Romanesque walls, except for the altar area and the side aisles, which were lengthened in the eighteenth century. The interior was painted, in 1759, by Filippo Fiori and Giovan Maria Giussani, both from Como, and the work was resumed, with partial repainting, in the nineteenth century. The seventeenth-century side chapels and Oratory of Saint Martha have altarpieces that were painted by Giuseppe Nuvolone, Alessandro Valdani di Chiasso and Pietro Ligari. On the exterior, the façade bears the date MDXXXVIII (1538), which refers to the rebuilding of the oak gabled roof after it was destroyed in a fire the previous year. In front of the church, visitors can admire the bell tower, which was begun in 1527 and is adorned with a few verses by the poet Giovanni Bertacchi from Valchiavenna. The beautiful portico was built at the end of the seventeenth century to mark the field that was used for pauper’s graves until 1829. Another important function of the four-sided portico was to protect the holy vestments during processions, in the event of bad weather.

INTERESTING FACT: the baptistery and Museum of the Treasury are must-sees. The baptismal font, which is 83 cm tall and has a diameter of 180 cm, dates back to 1156 and is carved from a single block of soapstone. It is decorated with figures sculpted in half-relief that depict the blessing of the water ceremony and the baptism on Holy Saturday. The Museum of the Treasury holds vestries and sacred artworks, including the “Pace di Chiavenna”, an eleventh-century Gospel cover that is considered to be a masterpiece of medieval goldsmithery. Composed of a walnut panel covered with 23 sheets of gold with repousee and filigree, it is embellished with gems, pearls and other precious stones, as well as numerous enamels.