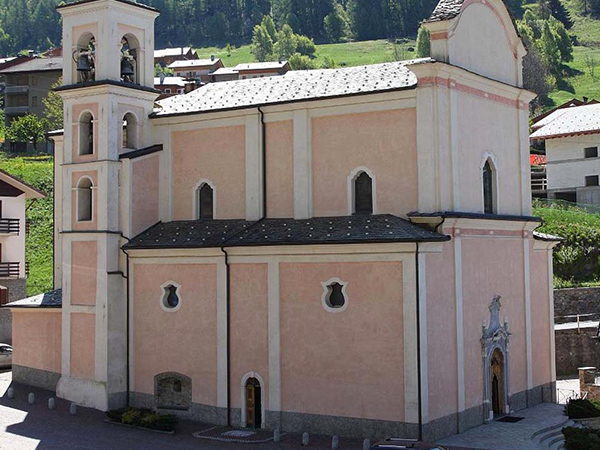 DESCRIPTION:
This religious building of medieval origin became a parish church in 1906. The façade is divided into three levels. The lowest and widest level is punctuated by four responds and has a magnificent Baroque portal dating from 1778. The central level has a mixtilienar window and only two responds. The upper level is composed of an arched pediment above two short responds. The interior consists of a nave without side aisles and has four side chapels. The ceiling of the nave and the vault of the chancel are both decorated with frescoes by Turildo Conconi. To the left of the entrance, there is a small arched, mosaic-covered niche that once contained the baptismal font, which now stands in the chancel. The font was designed by L. Benetti, who also sculpted the bronze statuettes depicting Christ and St. John the Baptist. On the altar in the first chapel to the left, there is a niche containing a Virgin under a gilded wood canopy, donated by Domenico Bozzi in 1862. In the second chapel on the left, above the modern wooden altar in eighteenth-century style, there is a carved polychrome altarpiece with two spiral columns decorated with gilded branches and flanked on the outside by two tapered columns whose capitals support a broken pediment adorned with cherubs and two statues of saints.