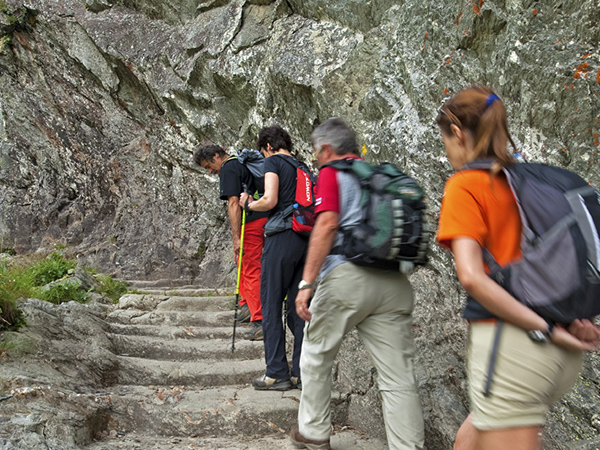 PERIOD: from mid/late May to October

TRAIL DESCRIPTION:
The Cardinello gorge takes its name from nearby Mount Cardine. The first attempt to build a path in the gorge dates back to the late seventeenth century, while tunnels, railings and avalanche barriers were constructed later. Today, it is one of the most appealing sections of Via Spluga, a cultural hiking trail in the Central Alps that has connected Switzerland and Italy for centuries through the two towns of Thusis and Chiavenna. The route begins in Isola, at an altitude of 1,268 m. The path initially climbs on the right (geographical) side of the valley and passes through the hamlets of Mottaletta and Rasdeglia, where you can admire numerous examples of “Carden”, or historic rural structures. These very old buildings are constructed of fir, larch or chestnut trunks that are stacked together and have joints at the corners. They were used as homes, as well as sheds and barns. The route continues uphill until the road narrows into a trail. It climbs a little then runs along the vertical wall over the stream – a ledge cut into the rock climbs gradually for more than 500 metres and ends at Stuetta under the barrier of the Montespluga dam. After reaching the top of the gorge, you can continue walking for another 30 minutes on level ground to the village of Montespluga (altitude 1,908 m), located just 3 km from the Swiss border. After taking a well-deserved break, you can return along the same route through the gorge or cross the Andossi Plateau to Madesimo and use public transportation to return to Isola.