A tour of Valtellina's bridges and walkways

A different way to discover Valtellina and its beautiful towns

the suspension bridges: the ponte nel cielo in val tartano and the cassandre footbridge in sondrio

Do you like adventure and adrenaline? In Val Tartano you can cross the Ponte nel Cielo, a 234-metre-long pedestrian bridge suspended 140 metres above the valley floor, connecting Campo Tartano (alt. 1,034 m) and the verdant pastures of Frasnino (alt. 1,038 m). It is one of the highest Tibetan bridges in Europe!
More info on https://www.valtellina.it/en/ponte-nel-cielo

Majestic views await also on the Cassandre footbridge, a family-friendly route from the centre of Sondrio to up high on the footbridge over the Mallero river, which links the villages of Mossini and Ponchiera. First opened in November 2021, this 145 metre-long footbridge crosses the gorges of the Mallero as it flows out of Valmalenco, soaring about the crashing water at a height of 100 metres
More info on https://www.valtellina.it/en/insights/trekking/the-cassandre-footbridge 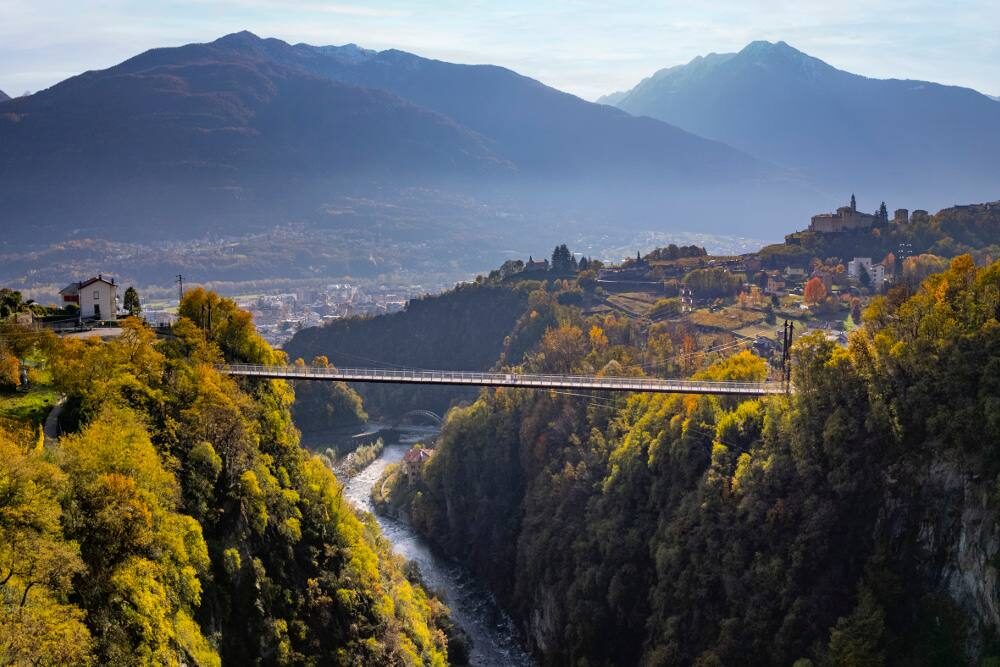 The Cassandre footbridge in Sondrio, first opened in November 2021 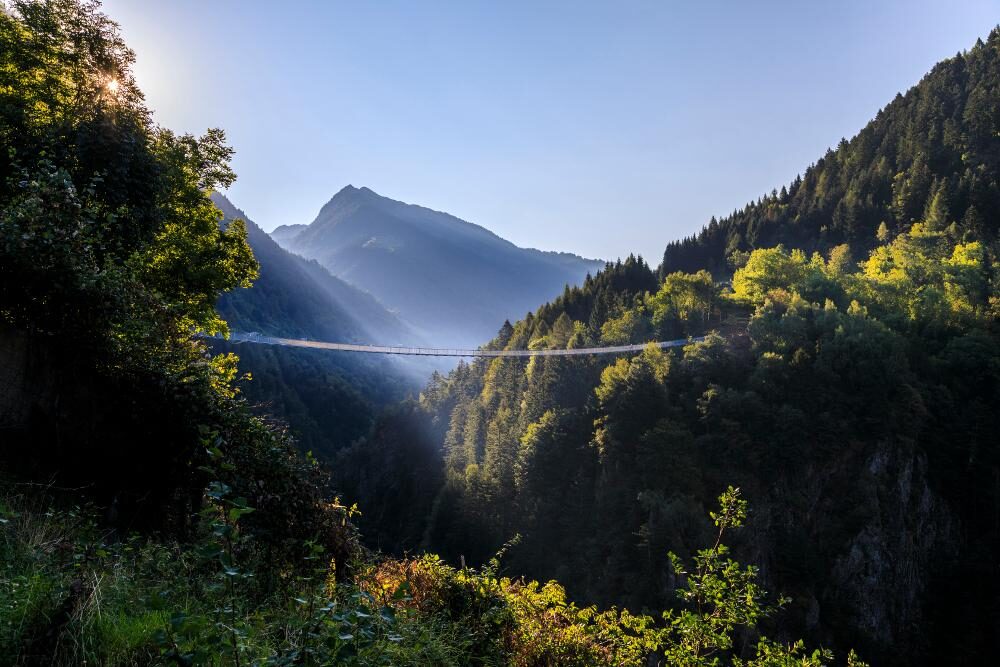 In the old part of Chiavenna it’s always worth admiring the Ponte di San Giovanni Nepomuceno with the impressive statue of the saint after which the bridge is named. Crossing the River Mera, the view from the bridge is a picture-perfect snapshot of the city’s ancient walls onto which clusters of houses have been built. Keep walking until you reach Piazza Pestalozzi, a pretty and serene square with a sixteenth-century octagonal fountain in its centre and buildings from the same period surrounding it.

Lined with ancient buildings and monuments, Chiavenna’s beautiful historic centre never fails to win over the hearts of visitors to this Alpine town. Don’t miss the Palazzo Vertemate Franchi, a Renaissance masterpiece in Piuro, the opulent Palazzo Salis that dates back to the eighteenth century, or the collegiate church of San Lorenzo, home to a famous baptismal font as well as the Museo del Tesoro, the Treasure Museum. 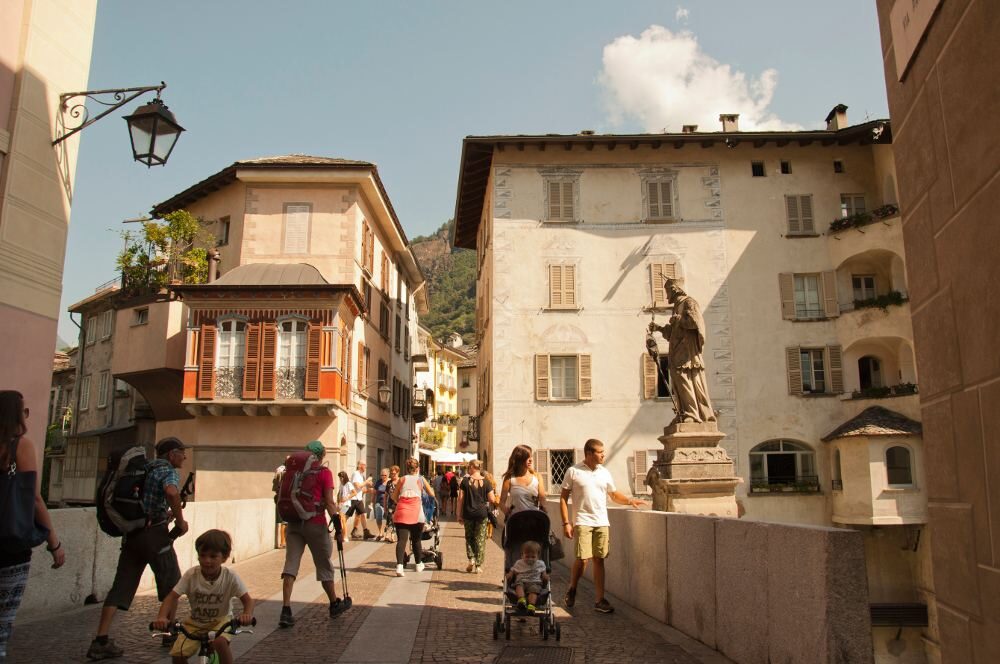 The Ponte di San Giovanni Nepomuceno with the impressive statue

the ganda bridge in morbegno

Built in 1778 by the Milanese architect Francesco Bernardino Ferrari, the Ponte di Ganda is another standout site in Valtellina that has done its best to withstand the test of time. The origins of this crossing location date back several centuries but it was wiped out by severe flooding. In its current form, you can admire certain original characteristics that were carried over in the reconstruction including the large 30 metre-high central arch flanked by two symmetrical side arches.

Today, the bridge has become a symbol of Morbegno. Once you’ve crossed it, a stroll into the town’s lively old town is basically mandatory. Make time to explore its narrow alleyways and boutique artisan shops, where you can acquaint yourself with the region’s local produce, particularly the acclaimed Bitto DOP cheese. 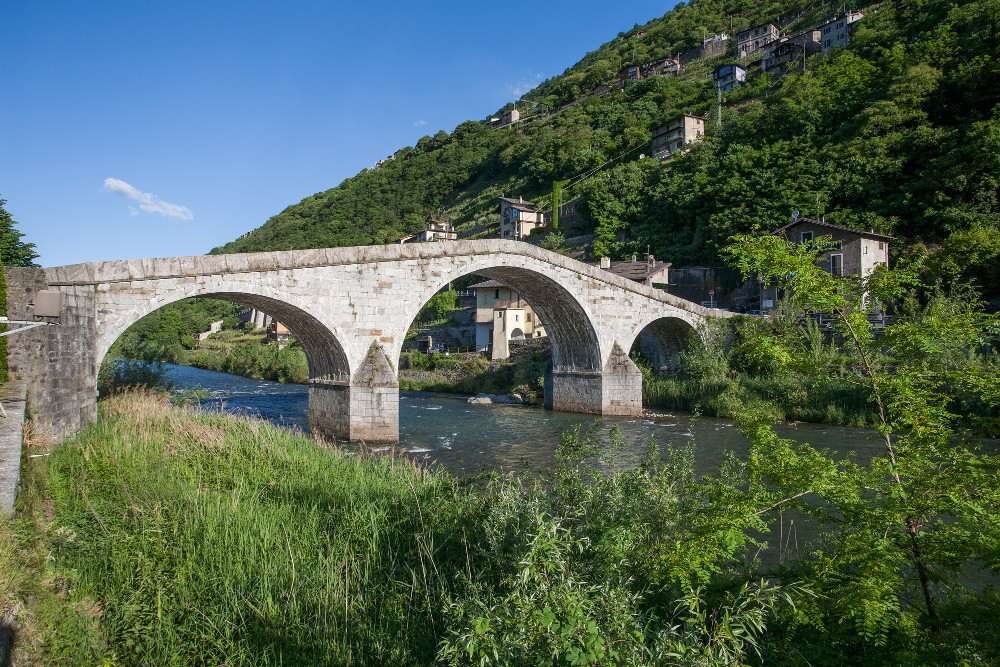 The beautiful Ganda bridge, a symbol of Morbegno

the bridge of combo in bormio

Another historic gem within Valtellina is Bormio’s Ponte di Combo, which dates back to 1300 when it provided the only access to the town from the Repubblica di Venezia via the Passo Gavia. While it has undergone restoration work over the centuries, it still bears many of the original features, namely the local grey stone and wide arch over the Frodolfo torrent. In the centre, there are two shrines facing each other showing St John of Nepomuk and the story of the holy crucifix.

Other than being steeped in history, the Ponte di Combo also boasts a first-rate view over Bormio, which hints at its once strategic location. Crossing the bridge, you can either head towards the Chiesetta della Madonna del Sassello and a great walk into Valfurva or towards Piazza del Kuerc, the beating heart of Bormio’s old town. 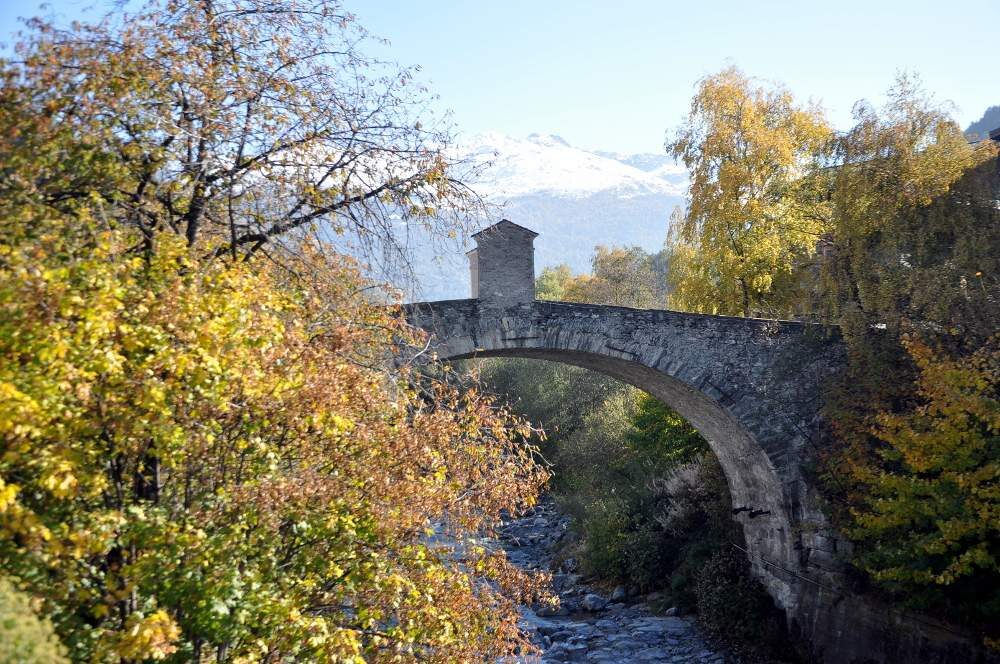 Once a wooden drawbridge, this spot now rolls out access to one of Tirano’s most iconic sites, the Porta Poschiavina, which serves as an entrance to the old town along with the Porta Milanese and the Porta Bormina. Now made of iron, the Ponte di Tirano, which crosses the River Adda, escorts visitors into the old town through a large brick doorway that once marked the start of the route towards Poschiavo and the Bernina.

While the Porta Poschiavina is undoubtedly the most important entrance to the town, it’s also part of the Palazzo Pretorio, the former official residence of Tirano’s mayor. Continue your walk to Piazza Cavour and Palazzo Marinoni, home of the town hall.

Tirano is one of those rare, human-sized towns that’s rich in history and easily walkable, so visitors can admire its wealth of buildings and villas from previous centuries that were once home to the local nobility – these include Palazzo Salis, Palazzo Venosta-Andres now Giacomini, and lastly, the Palazzo Torelli with the Torre Torelli tower that rises up at the end of the road of the same name 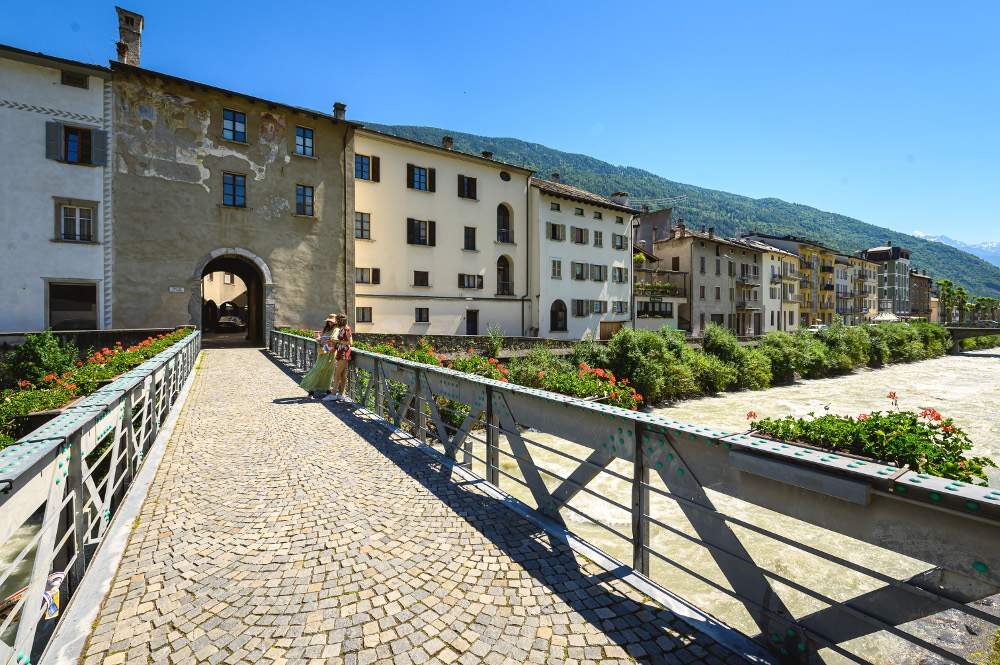 Porta Poschiavina, the most important entrance to the town