A cultural, historical and artistic jewel in the province of Sondrio

Shouldering the Swiss border and split into two by the River Mera, Chiavenna is a major draw in its eponymous valley, known for its artistic and cultural beauty, rich gastronomic heritage and gentle pace of life – it’s not called a Città Slow for nothing. Believed to date back to Etruscan times, Chiavenna was an important Roman city and strategic location for trade between Italy and the rest of Europe.

WHAT TO SEE IN AND AROUND CHIAVENNA

Full of corners, narrow lanes and aging stone walls, Chiavenna is a beguiling spot, no matter how many times you meander through its charming historic centre. Be sure to cross the ancient bridge over the Mera and enjoy the storybook views of the town

There are indescribable thrills when visiting the Acquafraggia waterfalls located in Piuro, just outside of Chiavenna, which left Leonardo da Vinci mesmerised during his visit to Valtellina. Visible from the roadside, these are considered the area’s most important natural monument and an undisputed symbol of Valchiavenna. In addition to the waterfalls, Piuro is also famous for its archaeological treasures to that extent that it is dubbed ‘the Pompei of the Alps’, having suffered a devastating landside in 1618 that destroyed the village.

Two further attractions take the shape of nature reserves: first up, the Parco delle Marmitte dei Giganti with its fascinating ice-polished rock and impressive crevasses formed by melting ice and erosion; then, it’s the turn of the Pian di Spagna Nature Reserve, an expansive wetland with stunning biodiversity and home to a large number of migrating birds during the season.

Any trip to the walkable town of Chiavenna would not be complete without a tour of its many historic palazzi and museums that radiate charm. 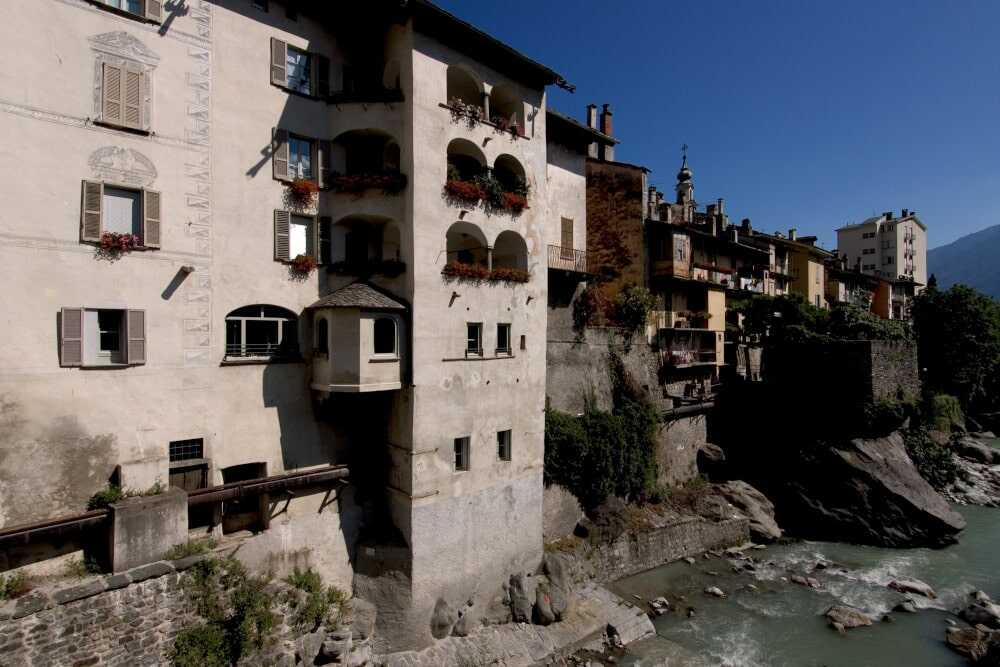 Foreshortening from the river Mera on the town of Chiavenna 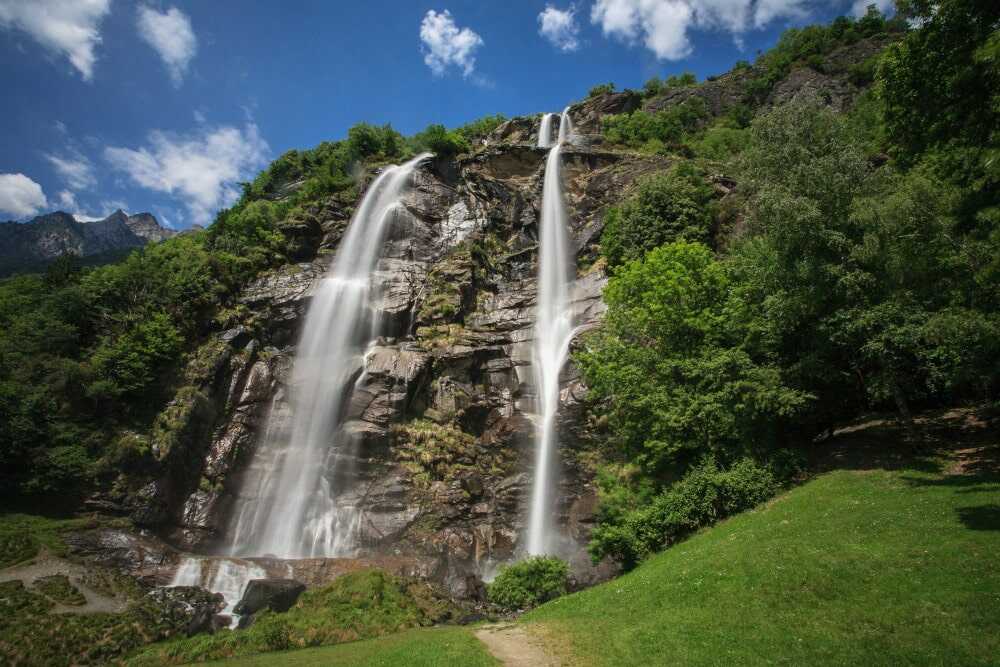 The Acquafraggia waterfalls, among the symbols of Valchiavenna

MUSEUMS AND HISTORIC PALAZZI IN CHIAVENNA: WHAT TO VISIT

Recognised with the prestigious ‘Orange Flag’ award from the Touring Club Italiano, Chiavenna hits above its weight with its density of historic palazzi, most notably the stunning Palazzo Vertemate, one of Lombardy’s most treasured 16th-century buildings. The 15th-century Palazzo of the Balbiani counts, Palazzo Salis, and the two 16th-century Pestalozzi and Pretorio palazzi are all equally as charming.

Located inside the collegiate church of San Lorenzo with its renowned baptismal font, the Museo del Tesoro – Treasure Museum – is home to a number of significant artefacts, including the exquisite 11th century ‘Pace’, one of the finest works of its kind made with engraved gold, precious stones, pearls and enamels. Piquing your interest even more, the Galleria Storica dei Pompieri di Valchiavenna celebrates the heritage of the fire brigade with an engaging exhibition, as does the Mulino Moro di Mottonera, a historic mill that testifies to Chiavenna’s artisanal heritage. 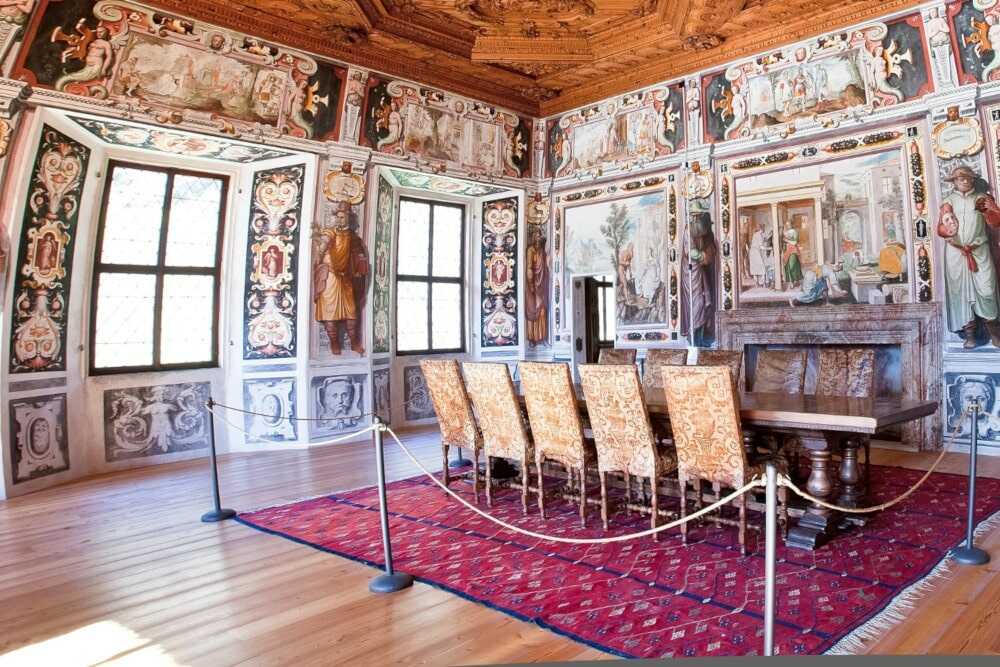 An interior of Vertemate Palace 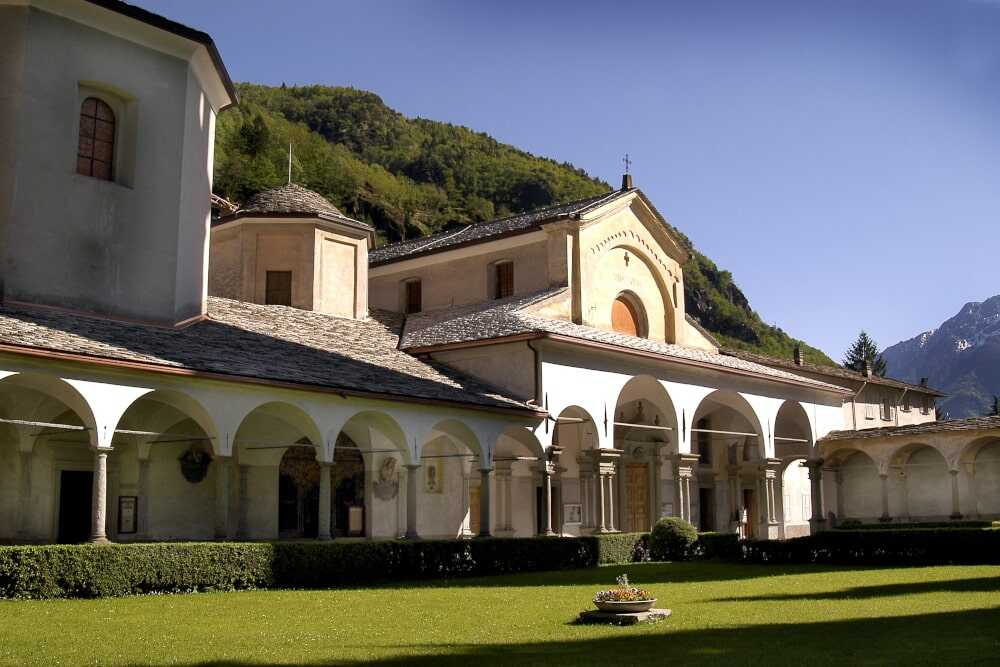 The Collegiate Church of S. Lorenzo houses the Museum of the Treasure

You’re never far from authentic local cuisine in Valchiavenna, which boasts a rich gastro heritage, exemplified by the age-old natural caves called ‘Crotti’ that benefit from a natural breeze known as ‘sorel’. This daily wind has long ensured a consistent temperature all year to best preserve the area’s wine, meat and cheese. Now part of Valchiavenna’s social fabric, the crotti are where you’ll go to tap into a connection with the finest food and wine from the region.

Sample local delicacies like local gnocchetti – also known as Valchiavenna’s version of pizzoccheri – as well as polenta taragna, dried cured meats like brisaola and Violino di Capra (made exclusively from the thigh or shoulder of Orobica goats) before satisfying your sweet tooth with a slice of Fioretto cake or Prosto biscuits, still made with the age-old recipe. While best enjoyed with a glass of Valtellina red wine, a beer would not go amiss either: thanks to the quality of the water and the Austrian influence during the 19th century, Valchiavenna has made of a name for itself in the world of artisan beer.

A table laid with the numerous typical products of Valchiavenna

OUTDOOR ACTIVITIES IN CHIAVENNA AND AROUND

For hiking, the Via Spluga is probably the most important trail which connects Chiavenna and Thusis, in Switzerland. You can also try to reach Savogno and Codera, two locations reachable only on foot.

If you are a cycling lover, do not miss to enjoy the Cicalbile Valchiavenna, suitable for all the family. Last but not least: experience the thrilling of canyoning in Val Bodengo!